The following article by Erik-Jan van Oosten has originally been published on the Climate-KIC Community hub.

There has been a strong push towards putting a price on carbon since the oil prices came down halfway 2014 and I wouldn’t be surprised if at COP21 a carbon price in some sort or form will be part of the agreement. More reason for us to make sure we end up with a fair and sufficiently effective mechanism to promote as a solution. 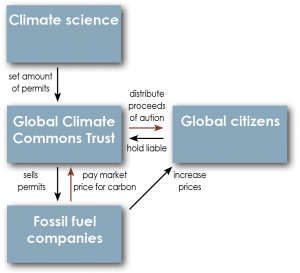 A strong and consistent carbon price would be a huge incentive for innovation in low-carbon technology and services. Yet the positive effects of a substantial carbon price through for example a government imposed carbon-tax is on itself not sufficient to make sure we don’t end up burning more than our planetary carbon budget. If the price is set too low there will not be enough incentive to transition to a low carbon economy and if the price is too high governments will not participate as it will hurt their economies too much and thus the tax will fail.

The problem from an economic perspective is that the current prices of fossil fuels reflect the abundance of the fossil fuel reserves, not the actual scarcity of our carbon budget. Writing off these “unburnable” assets as divestment campaigners want to do is, from the viewpoint of the fossil fuel companies, not feasible as these companies could risk bankruptcy if they decide to face the climate reality and write off their unburnable assets.

What we need to make sure of is that no more fossil fuels than what our carbon budget allows will be extracted while giving fossil fuel companies the time to write off their unburnable assets by creating an artificial scarcity. The solution that ensures the gradual phase-out of fossil fuels is called CapGlobalCarbon. Let climate science determine how much fossil carbon can enter the economy on a yearly basis and auction the rights to extract fossil fuels to the few companies that actually introduce new carbon into the economy. As our carbon budget tightens the number of permits will need to decrease by about 6 percent a year, meaning that every year 6 percent more fossil fuels will stay in the ground and become “unburnable”. The setting of a hard limit on carbon is called capping, and is necessary to set the exact amount of carbon we can safely burn based on the best knowledge available at a given time. The auction of permits is necessary to set the price of the burnable carbon so as to reflect the scarcity of the burnable carbon and allocate the carbon budget without having to face (geo)-political struggles. With CapGlobalCarbon, no countries are involved in dividing the slices of the carbon-cake. The revenues from the auction are divided on a per-capita basis to inhabitants of participating countries. This means that we intend to give everyone, regardless of their nationality and income, the same share of the revenues which will hopefully increase popular pressure on governments to enforce the ban on unburnable carbon, since it could drastically reduce poverty within their borders.

If you use an average amount of fossil fuels the gains from the dividends of the auction will be offset by the increased price of fossil fuels you pay, making the scheme cost-neutral for the average user. As 80 percent of the world population uses less than the average amount of fossil fuels most of us would directly benefit from a global cap on carbon. The competitive advantage of energy efficient companies will increase making sustainable business more economically attractive. This could be huge in terms of global economic prosperity, as the world’s poorest will be able to afford their sustenance, and a long term enabler of the growth of the green economy.

The greatest advantage I see for Climate-KIC is that this scheme can be set up outside of government, meaning that regardless of what will be decided on COP21 there can be meaningful progress to secure a stable climate. The CapGlobalCarbon project can very well become part of CSR as all companies have to do to comply is to ban fossil fuels not carrying a permit, just as frontrunner companies now ban non-FSC wood or only work with ISO-14000 complying companies. We see CapGlobalCarbon as a system innovation with great potential for Corporate Social Responsibility and sustainability management.

To conclude: yes, we should put a price on carbon. This is done most effectively if science determines the amount of burnable carbon and if the market determines the allocation of this carbon. Through an ingenious clamping mechanism CapGlobalCarbon provides a long-term, self-reinforcing solution. This needs to happen quickly. We are able, and have the moral obligation, to prevent disastrous climate change from occurring. The CapGlobalCarbon team is looking for partners and support to make this bold plan happen, as well as specialists in strategy, economics, law and governance to join the core group. Let’s together make CSR about putting a global price and cap on carbon!